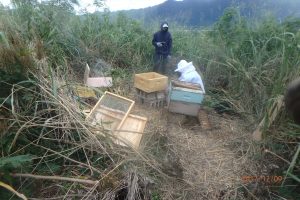 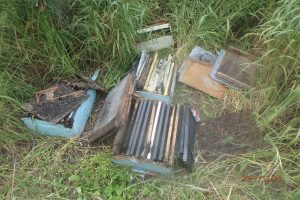 Hawaii is a small place, and people know people.  Raymond called and said he knew where there were two abandoned hives.  He said the beekeeper got a brain tumor, moved to Florida to be with his sister then died.  He said the guy hadn’t been around for about two years.  He wanted help to move them into a hive that wasn’t falling apart.  The beekeeper he was talking about was Howard McGinnis.  He taught me to be a beekeeper.  As I said, Hawaii is a small place. We went to where the hives were and I saw that only one was alive, just barely.  The boxes were so termite eaten they were falling apart and had big holes in them.  With my guidance Raymond moved the bees to the new hive.  I told him he HAD to move all the other old equipment out because they would attract bugs. He called me the other day and said they looked like they were doing well.  If you look closely in the first picture you will see his son without any veil or bee suit.  The guy is a natural.