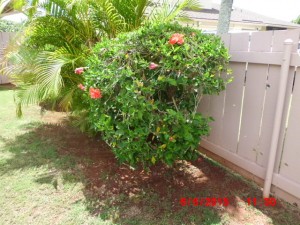 I had planned to build a hive and some honey supers. Sure! Just as I was starting to get my saw and other stuff ready a woman called. She said the neighbor had bees in the bush, they were afraid the bees would move into their walls. Her dad knew somethings about bees and their behavior.  He owned the house the bees were at so there was no problem getting access. They were hanging in a line about 4 inches around and 18 inches long. There were a lot of them! This was the dad’s birthday also. Two grandsons came and watched. One said he had never seen so many bees in one area in his life.  By the time I got back to the house it was raining. So much for building hives today.