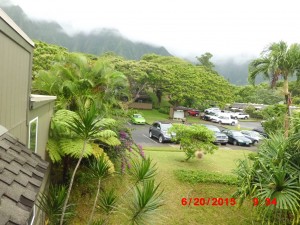 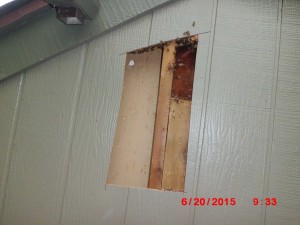 This is the fourth time we have been called to this condo complex. What makes this one fun is that the owner of the condo called and said he had bees. Then when I was on my way he called and said the association took care of the outside. About an hour later I get a call from the manager.  When you have been working with bees for awhile you learn their behaviors. As soon as I got up near them they came out and buzzed my head. Then when the carpenter cut the hole in the siding they came out in full. They were on both sides of the stud, which is unusual. Then as I was removing the comb I was looking for capped brood (baby bees) and found only about 10.  In a hive the size and age this was there should have been 100 or more. Without a queen we couldn’t get them into the nuc. Even with queen lure they wouldn’t go, so we had to kill them.